Nick writes & records all of the songs with Marina (he co-writes many of the lyrics). He plays acoustic guitar during acoustic live shows with Marina, and sometimes plays drums during the full band shows.
On recordings, Nick often plays bass, guitar and plays or programs drums.
Marina & Nick met in Illinois and have been collaborating since.

A guitarist and a songwriting partner of Marina V, an international pop singer/songwriter in Los Angeles, Nick Baker was friends with the jocks, the nerds and the musicians in high school, because he himself has always been all three. A jiu-jitsu practicing guitarist/drummer with a recent PhD in Education, Nick grew up in Springfield, IL, and started out on drums as a 4 year-old KISS fan. Over time, he started to write poetry and songs, while forming rock bands.

In his early 20s, Nick met Marina, and they have been writing and performing together ever since. Highlights include tours in Europe and performing at the famous Kodak Theatre, as well as at the Russian Embassy in Washington, D.C., co-writing/producing an ad for PEPSI with Marina plus co-writing numerous songs for many films, tv shows and for NBC's Days of Our Lives. 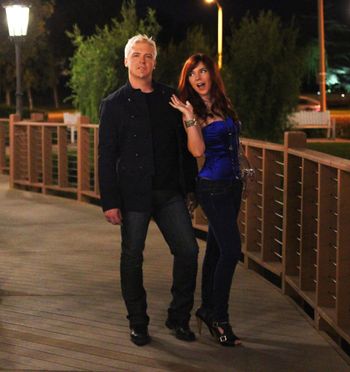